Discern Style Guide
Discern’s Style Guide seeks to organise the overload of design-related information available in the world. Here’s a ready reckoner to help you understand your Mid-Century from your Classic, your Ethnic from your Scandinavian and what Trendy looks are all about. Take a look at how we have classified the foundation of our style system based on historical design movements and geographic origins, from the 18th century till today. Here are our four main style categories - Classic, Ethnic, Modern and Trendy. 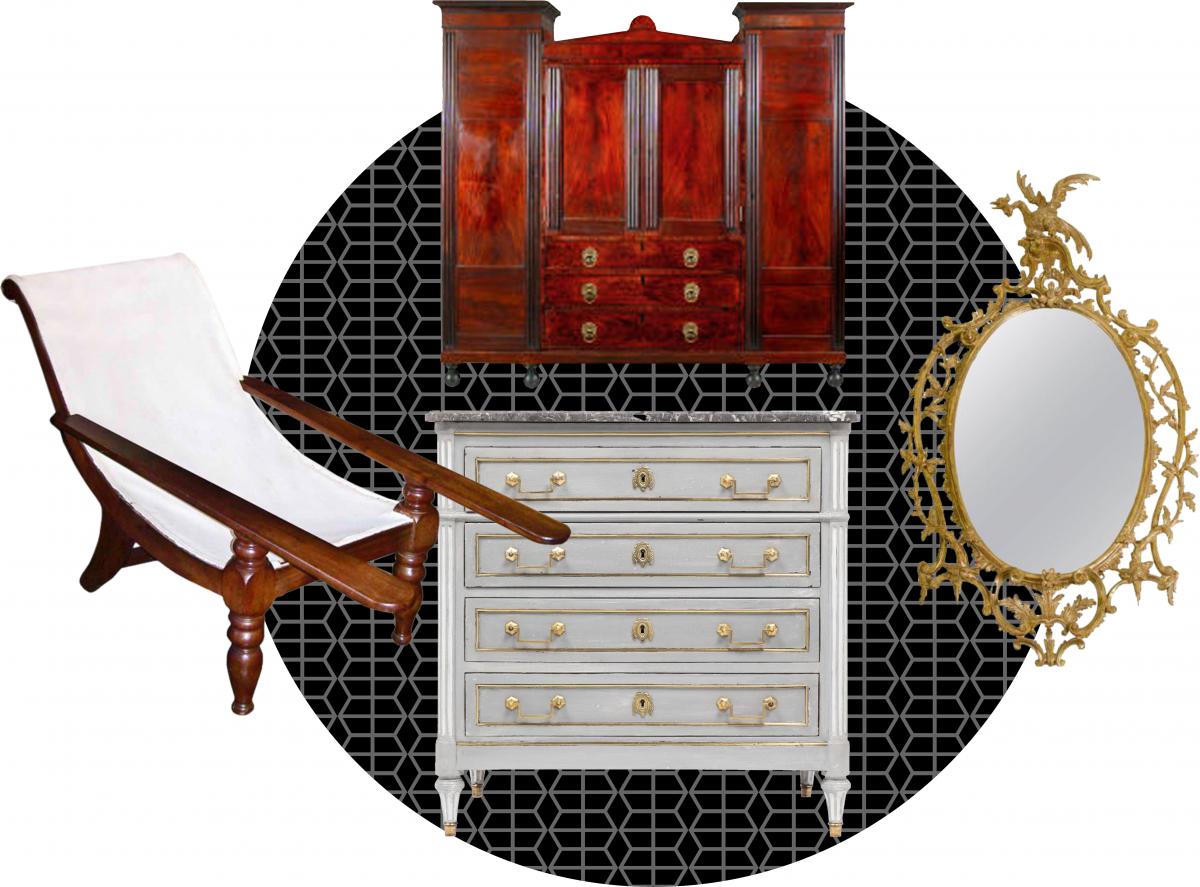 Classic:
At Discern, we define the Classic style of furniture and design as that which dates back to the 18th, 19thand early 20th centuries. It was during these periods that furniture was crafted by skilled artisans and bore intricate details and decoration. While this style continues to exist in its pure form, it is also being redefined to suit contemporary tastes and preferences, resulting in a sort of transitional movement from classic origins. In order to navigate through this expansive time period of multiple influences, we have highlighted three main classic styles that are popular in India.

Colonial – refers to furniture that specifically shows elements of British, French, Dutch and Portuguese influences in India. This style is predominantly represented in the hill stations and tea estates of the Indian subcontinent, in the churches of Goa, and in Pondicherry and Cochin. Identifiable by the use of dark woods such as ebony, rosewood, teak and mahogany with elements of woven cane, this style was adapted to suit the tropical Indian climate. Signature pieces include the Plantation Chair – a permanent fixture in Gymkhanas - peg tables with Queen Anne legs, rosewood armoires and chests of drawers with wrought iron details.

European –  refers to popular Western classical styles, such as Italian Renaissance, Victorian Louis XV and XVI, Baroque, Gothic, Neo-Classical, Art Deco and Nouveau, when furniture was expertly crafted from solid woods such as mahogany and walnut, metals such as bronze and brass, and ornamented with intricate carvings and gilded details. In comparison to the Colonial and Rustic styles, European furniture was lavishly adorned while paying close attention to delicacy in form and proportion. Using this style of furniture in space creates a very formal and aristocratic environment due to the intricate details, as well as the ergonomics of the furniture pieces.

Rustic  – refers to Classic Vintage, French Country, Shabby-Chic, American Classic furniture which are derivatives of European and Colonial furniture, but simpler in form and detail. This style is best represented by distressed and deliberately worn-out finishes, with very little to no ornamentation, in order to create a more natural, casual and comfortable ambience in interior spaces. Ethnic:
Discern believes that furniture, art and architecture styles indigenous to key civilizations of the world serve as the basis of form and inspiration for many design movements. For example, the Art Deco movement made use of Assyrian and Egyptian motifs as ornamental embellishments. French Japonism and Chinoiserie were inspired completely by Japanese and Chinese art and aesthetics; the Indo-Saracenic school of architecture drew forms from Indian and Islamic architecture and art with British architecture. Thus, we believe that it is absolutely imperative to shed light on and emphasize the influence of ethnic design in home décor today. This category is not bound by any specific time period but is instead defined by geography. The ethnic design generally involves a high level of local craftsmanship and is a reflection of the use of materials applied to the aesthetics, form and function of native tastes and traditions.  We list some of the popular styles featured by Discern within the ethnic design category.

Indian – Walnut–wood carved furniture from Kashmir, Meenakari jhoolas, silver and mango wood dowry chests from Rajasthan and keepsakes detailed with bidri inlay work from Karnataka are some examples of Indian furniture and crafts. These styles flourished in the Princely states of pre-Independence India: a time when royal dynasties were patrons of Indian crafts, thus also having a significant influence on furniture forms and decoration.

Middle Eastern – Indigenous furniture influenced by Islamic cultures from Turkey and North Africa, Iraq, Iran, Saudi Arabia, and the UAE, to Afghanistan and Kazakhstan, come together to define the basis of the Middle Eastern aesthetic and décor style. Afghani and Turkish kilims depicting local myths and legends, silk Persian Isfahan carpets, furniture inlaid with mother-of-pearl and Moroccan lamps with filigree designs are some popular examples of Middle Eastern décor. While tables and chairs were not popular furniture elements in most cultures of the Middle East, ornate arabesques carved on wooden screens, lamps inspired by local architecture, and hand-painted wall murals are typical representations of this style. Modern:
The Modernist design movement flourished in the mid-20th-century post the Art-Deco movement, as mass production due to industrialization gained momentum and became an everyday practice for architects and designers. This theme was a radical departure from classic forms, styles and techniques, in which function preceded form. We have broken the Modernist style into three main categories based on design periods and trends in furniture and décor during this time, giving you Mid-century, Scandinavian and Contemporary sub-styles.

Mid - Century – By Mid-century design, we refer to the Cubist, Minimalist, Bauhaus & Brutalist movements and schools of thought that were predominant between the nineteen forties and nineteen seventies. The armchair and ottoman by Charles and Ray Eames, Le Corbusier’s chaise - lounge, and the Barcelona chair by Mies Van der Rohe are icons of this movement. They made use of innovations such as tubular stainless steel, PVC and bent and moulded plywood, giving a certain visual lightness to the furniture. Interestingly, due to advances in space travel, a lot of these design themes of that time revolved around the space age.

Scandinavian – This style can be best seen in furniture designs originating from Sweden, Denmark, Norway, Iceland and the Netherlands, which focus on simple, functional and minimal lines. The Alvar Aalto chair sold at Ikea uses bent plywood and birch and is a great example of Scandinavian design. Popular materials include the use of light-coloured woods such as pine and birch, plastics, anodize

Contemporary – This style refers to furniture designs created in the 20th & 21st centuries, particularly getting their influences of line and form from the Mid-century and Scandinavian schools of thought. It is also referred to as Modern Contemporary as it was influenced by the modernist movement. The Contemporary style, however, is ever-evolving: as a reflection of the conditions of contemporary living, it became necessary for furniture to have a simplistic design approach, keeping in mind function as the basis for form. Materials such as glass, high gloss polish lacquers, copper, brass and electro-plating techniques all encourage the final look of contemporary pieces: crisp lines, pronounced edges and smooth textures, which distinguish the clutter-free approach of this style. Trendy:
While the origins for Contemporary design are rooted in the Modernist movement, Trendy design refers to current movements, tastes and preferences in the 21st century. Notably, the trends we follow today have some historical foundation but have been subjected to several layers of re-interpretation, manipulation and re-definition. These "trends" are still fluid in nature and are yet to stand the test of time.
Industrial - The industrial look is peppered with industrial equipment repurposed with distressed wood, iron and oxidised metal patinas to create a more casual aesthetic that lends itself beautifully to laid back environments such as bars, clubs, restaurants and commercial spaces. Exposed brickwork, peeling paint, exposed ducts and filament bulbs are common features used in spaces that reference this aesthetic.
Eclectic - Eclecticism in decor indulges in every style with no particular adherence to any specific school of design. The same space could be "eclectically" styles with pieces of Asian origin, juxtaposed against a Classic European setting for example. Eclectic decor gives rise to cross-referencing such as Retro - Glamour, Indian - Modern, Industrial - Rustic etc. The common theme is the high degree of design elements. Again, what does the degree mean here? Are we talking about how many design elements are called upon, to create an eclectic look?
Glamour - This style of furniture is typified by luxury, polish and sophistication. Furniture forms are highly detailed, intricately designed and embellished with contemporary techniques and processes. Classic furniture can be reinterpreted with modern finishes such as high gloss PU, metal cladding and leafing, skills and events, glass and mirror and so on, in order to achieve a highly reflective, glossy and plush environment.